Feb 12th, 2013
This post was originally written on the StevieSnacks.com blog. 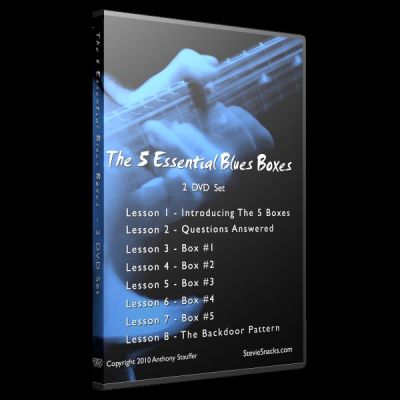 In 2008 I introduced a concept called The 5 Essential Blues Boxes. The popularity of that series exploded, and it is primarily responsible for putting StevieSnacks on the map. Since it was released, I've answered a ton of questions and read thousands of emails/comments about the lessons. These responses fall into three main categories:

The players that love my approach have almost no questions about it. They take it, use it, and love it. But the players who don't embrace it right away usually ask the same question:

How does this approach differ from a traditional approach to learning blues guitar?

I'm going to attempt to answer that question in great detail today.

If you learn blues the traditional way, you will be taught minor pentatonic scales. They will be presented as 5 "boxes" that ascend up the fretboard. (These are different from the 5 Essential Blues Boxes that I teach). The problem with this approach is that many players get stuck in those minor pentatonic boxes and never escape. I can spot one of these players within seconds of hearing them play. They memorize those shapes, and can play those scales, but it sounds like crap. If they attempt to learn licks, they soon discover that many licks don't 'fit' their scales. In an attempt to play by the rules, they try to resolve great sounding licks by figuring out how to play them with scales, and the results are terrible.

Some of them progress to learn the major pentatonic scales. Now they've got to visualize two overlapping sets of "boxes". The problem is, a lot of the best sounding blues licks jump between minor and major pentatonic scales, and not in a predictable way. It is a lot of work trying to map the notes of a complicated lick onto two overlapping sets of boxes, especially when that lick jumps between major and minor several times.

Keep in mind that this approach has produced plenty of great players. There's no denying that. But for every player who learns this way and manages to make great blues from it, there are hundreds, possibly thousands, who get stuck, never making it out of those minor pentatonic boxes, never learning to play a single 12-bar solo that they love. That is where my approach has found its niche.

When I picked up the guitar, I had a small base of music theory knowledge from my childhood that helped me figure out the basics: the key of the song, the chord changes, and the major/minor tonality of the song. But when I began to learn soloing'?¶I had no time for theory. I memorized licks without any concern for where they came from. I learned to play exactly what I wanted to play, I didn't care why it worked or what I was 'supposed' to know before I learned it.

Before long, a system began to form in my mind. There were five shapes that encapsulated the majority of licks I was learning. So I began to visualize those 5 shapes whenever I was soloing. Eventually I began to learn licks that almost fit into those shapes, but not quite. Usually there were one or two notes that occurred outside, or inside the shape, using a note that was not part of the primary outline.

I began to think of those notes as "auxiliary" and "hidden" notes. What did those notes do? They usually changed the signature sound of whatever shape I was playing in. If the shape had a "minor" sound, the auxiliary and hidden notes gave it a major sound, and vice versa. In reality, I was jumping between minor and major pentatonic scales without realizing it.

Using this approach, I developed the ability to express myself with a high degree of technical prowess, and polish. I didn't worry about memorizing the scales. I just learned the licks that I loved, developed a simple system for organizing those licks, and expanded it just enough to prevent it from becoming too complicated.

In early 2008 I began teaching this approach as "The 5 Essential Blues Boxes". The response was overwhelmingly positive. People treated it like a breath of fresh air, but I had no idea why. I had no idea how ineffective traditional blues instruction was, I didn't even realize it was different from my approach. Over time, I realized that there tens of thousands of guitar players attempting to play convincing blues guitar using blues scales as a starting point, and they were failing.

My approach cut right through the heart of traditional methods. Instead of teaching people scales, I taught them five simple shapes, and I showed them what kinds of licks could be played in each shape. Right from the beginning, my focus was on playing licks.

Of course, Box 1 was familiar, as was Box 2. But when they hit Box 3, something pretty incredible happened. All of a sudden they were playing sounds they never could make before. Some of them didn't know why it sounded better, it just did. But the most educated of my students realized something crucially important. My approach forces people to mix major and minor.

The way that I define Box 3 is based on B.B. King style licks, not on the traditional minor pentatonic box that most people are taught in that position. Some of my viewers had been trying for years to play some sweet sounding B.B. King style blues, but their knowledge of blues scales couldn't make that happen. They put that knowledge to the side, did exactly what I told them to do in Box 3, and .... magic.

Make no mistake, my approach is a shortcut. The promise of my system is this. I won't ask you to learn a bunch of scales, instead I'll teach you to play licks that sound better than what you can play now, and I'll show you a very simple way to keep those licks organized in your head. The obvious downside of my approach is that it doesn't scale much outside blues and blues rock music. If you want to play blues that's influenced by jazz, fusion, or metal, you'll need to learn more than what I can teach you.

I don't discourage people from using my system as a starting point, and leaving it behind when they want to learn to play other styles. I hope that's exactly what they do if that's their desire. But for the tens of thousands of players who are struggling to play even one lick that makes them happy, for those who will never take the time to memorize scales, and those who have no desire to play anything other than the simple blues that makes them happy, my approach offers them a faster, more efficient way to play the sounds they want to hear.

I have had my share of critics, and their rhetoric is usually consistent. They feel that shortcuts are a bad idea. They want people to learn as much as possible, not to take shortcuts, learn things the right way. And I usually agree. If someone wants to expand into other forms of music, if they'll feel trapped playing great sounding blues and blues rock, then they should put on their big boy pants and get to work. Of course this means they'll do a ton of work memorizing things that do absolutely nothing for the soulfulness of their playing, and once they've memorized all that stuff, they'll still have the task of actually making music using that knowledge.

They will end up with a library of knowledge that would put most of my students to shame. But once they've acquired all that knowledge, they still need to learn how to apply it. They'll need to learn how to make music, to play something people actually want to listen to. And there's a very large chance that they won't even be happy with what they're able to play. I get emails from people like this. Head knowledge does not equal self-expression. Self-expression is sometimes hindered by having too many options, and that is exactly what traditional guitar education gives struggling blues players: too many options, and the wrong kind of options.

It is a shame for someone to put down their guitar out of frustration because they can't make scales sound like licks. My role, and the role of the "5 Essential Blues Boxes" is to get more people playing blues they love, faster. People are more likely to learn more when they enjoy what they're doing. Maybe they'll go on to learn much more than I can teach them, or maybe they'll just get stuck like I did.

If so, they'll be stuck playing exactly what they want to play, and smiling every time they pick up the guitar :-)