Over the past 10 years, I've continually improved the production quality of my videos, as well as the educational quality of the lesson format. I've added three new features in my most recent course Clapton's Influence: Crossroad Blues that make it easier for you to study. Here's a look at what those new features are.

I've used the same basic format in my soloing and rhythm lessons for many years. Solo are divided into choruses, each chorus is divided into licks. Each lick is taught the same way.

This lesson format make it very easy for viewers to loop over each individual lick, either at full speed or half-speed after studying the breakdown.

But this format isn't as great when you're studying a lick that starts at a non-intuitive place in a measure. Those types of licks need to be "felt", and it is difficult to feel the timing when listening to those licks in isolation without any context from the surrounding measures.

During editing of the Crossroad Blues course, I discovered a feature in my video editing software that allowed me to easily add a click track intro to these individual lick demonstrations. Now you'll now hear an isolated 4 (or 8) beat count-in from a click track before each demonstration starts.

This is especially helpful when looping over the lick demonstration. Now, when the loop repeats, you can hear the clicks, and be more prepared to start the lick at the right time.

Whenever I create a new course that requires a backing track, I also create a video backing track to go along with it. The backing track video always includes the standard TXBA Progression Counter along the bottom as a visual reference. But with this new Crossroads course, I've added another useful feature. 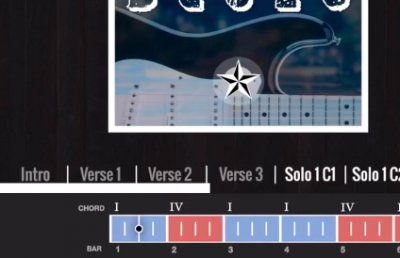 Next, above the Progression Counter is the Progress Bar, a sliding white indicator that shows you your current position in the whole track.

Above the progress bar is something new that I call the Section Bar, and it shows you all the different verses and choruses of the song. As the Progress Bar slides to the right, you can tell at a glance which part of the song you should be playing by which section is directly over the end of the Progress Bar.

This is especially useful for a song like Crossroads because all the verse and solo choruses have the same progression. Without this section information, it can be hard to keep track of how many verses have already been sung, how many solo choruses you've played, and whether or not you should be ending your solo now, or after another chorus. 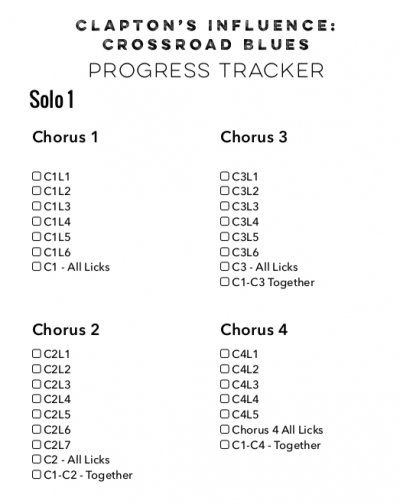 In 2017 I released a major two-volume speed development course called Texas Blues Speed Workshop. During the planning of that course I came up with several ways for people to track their progress.

This progress tracking idea was a big hit with customers, and I wanted to start using it with my other courses. So for this course, I created a tracking sheet that helps you track your progress as you learn the solo.

Each chorus is presented as a separate goal. Each lick within a chorus is listed as an objective that can be checked off. At the end of each chorus is an "All Licks" objective, which you can check off when you're able to play the entire chorus straight through without stopping..

The last objective for each chorus (except Chorus 1) is a "Together" objective which requires you to combine the previous choruses with the new chorus you just learned. Before you can move onto the next solo chorus, you have to sucessfully integrate everything you've learned up until that point.

This method ensures that you won't forget the earliest licks in the solo when you move on..

These features should make it even easier to learn from this course, and will become standard features in all future soloing and rhythm courses. Eventually I'll probably go back and add them back into my earlier courses as well.

The best way to study this (or any other) course at TXBA is to join the TXBA Locals. You'll have access to every course at TXBA, and some exclusive features of our online player like Instant Looping, SoundSlice tablature and video zoom.