Why I Play Zexcoil Pickups

Jan 18th, 2013
This post was originally written on the StevieSnacks.com blog.

I got my first set of boutique pickups over ten years ago, a set of Lindy Fralin Vintage Hots. When StevieSnacks began to gain popularity, I got the opportunity to play a few other sets of high-end pickups. These include Rocketfire Guitars, McCon-O-Wah Belltones, and Jason Lollar Blackface. All of these pickups made me happy in the guitars I used them in.

The problem is this. People who watch my videos assume that I've done years of research to uncover the one single set of pickups that give you the magical SRV tone. Sadly, I have not. The truth is I never cared about finding the perfect set of pickups. After I got my first set of Fralin pickups, I was done searching. Every set of high-end pickups I've played has been in that ballpark. Another way of saying it: they were all "good enough".

So answering the "which pickups should I buy?" question over and over for five years straight has left me disinterested in the world of boutique pickups. It seems like every year I hear of ten more boutique pickup makers promoting pickups that sound like old pickups, mentioning clarity, transparency, scatterwound, alnico, blah, blah, blah. I'm sure they all sound great but I have no interest in wading through 100 sets of pickups to find the one that sounds best by a hairline margin.

None of the pickups I owned had a clear, identifiable advantage over the others, making it impossible to honestly recommend one set over another. I wanted to be able to say "I play _____ pickups because ________". But I couldn't say that about any of the pickups I played. They all just sounded........great. 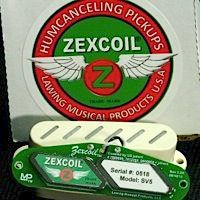 Then one day I just hit a wall. After 15 years of dealing with the hum from my pickups, I was just done. Completely done. Sick of it. I was tired of turning down the volume knob, tired of playing neck/middle when I really wanted to play the neck pickup. Tired of coming up with complicated EQ plugin curves to minimize the droning buzz from my guitar in between lick demonstrations.

Literally the next week I stumbled upon the Zexcoil booth at the Great American Guitar Show near Philadelphia. The timing was oddly comforting. I played a few of their guitars, talked to the owner, and the next week I was trying out a set of Zexcoil pickups.

I was sold within 5 minutes.

We discussed an endorsement agreement, and just like that, I was done with pickups. Done questioning which pickups I should recommend, done explaining how all my pickups sound good, and done trying to come up with a reason why I played any of the pickups I played. This brings me to my primary point.

Why Did I Choose Zexcoil Pickups?

Now, when asked that same question, I can say with absolute assurance that I prefer Zexcoil pickups for specific reasons.

Let me make it abundantly clear: I was not unhappy with any of my previous pickups, at least not from a tone perspective. They all made me happy, but none made me abundantly happier than the others. However, they all suffered from the same single coil pickup hum problem. This became unbearable for me. I chose Zexcoil pickups because they had very clear advantages over any other pickups I owned.

For me, great tone is not measured just by what I hear, but the sum total of what I hear, and feel when I play. I think the Zexcoil pickups sound fantastic, but this is nothing new, I had fantastic sounding pickups before. Ask me if I feel better playing these pickups, and I'll just stop playing and let the silence do the talking :-)