Aug 27th, 2011
This post was originally written on the StevieSnacks.com blog. 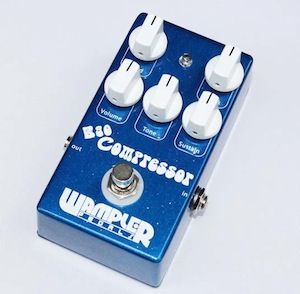 First, I have very little experience with compressor pedals. Second, the Ego compressor was not some new release for the Nashville Amp Expo.

Wampler Pedals actually had a pretty cool high-gain distortion pedal they were demoing for the first time at the show. The SLOStortion is a surprisingly thick sounding distortion pedal. Not entirely my cup of tea for blues, but I was surprisingly intrigued by it's beefy tone.

I spent a good amount of time in the Wampler room trying out the pedals, mostly playing through their compressor pedal called the Ego.

However, a clean amp played at relatively low volumes is an exceptional case. The tubes aren't adding any compression of their own, so it's not the "clean" that bothers me, just the lack of sustain. At loud volumes, a clean amp will cause the strings to sustain more, but a clean amp at low volumes is rather plinky.

A compressor pedal, I theorized, could help solve some of this by adding more sustain to the notes. But I didn't want to lose the snappy attack, especially for those plucked Albert King style bends. So I kind of wanted the best of both worlds.

I am in no way a connoisseur of compressor pedals. So when I bought the Ego, I had not done a ton of research on competing pedals. But it did what I wanted it to do, and sounded very transparent. Good enough for me, and I like it quite a bit.

When I'm done with my next lesson series I'll be doing a full review, but the video from the show should reinforce some of what I've written here.