Nov 16th, 2009
This post was originally written on the StevieSnacks.com blog. 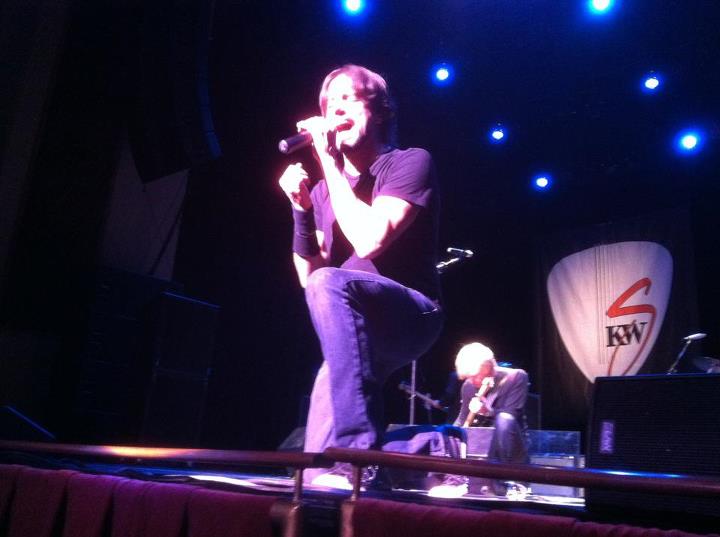 Last week I was notified by a StevieSnacks viewer (thanks Doug, from Harrisburg) of a Kenny Wayne Shepherd show in Lancaster, PA. There’s a great club there called the Chameleon, and I had seen him play there once before back in my college days.

Last night I went to the show, and I thoroughly enjoyed it. Doug had grabbed a spot right near the stage, and because we’re both pretty tall, we enjoyed the show without any obstructions. Don’t know about the people behind us, but oh well…. :-)

I remembered while I was watching the show why I’ve always liked Kenny’s playing. He plays hard, but he doesn’t over-play, only turning up the accelerator when appropriate, and even when he’s going 90mph he’s always clean, always precise.

Some people take issue with his playing, saying that he’s not original enough, but I’m willing to bet that Kenny enjoys his own playing a lot more than the people doing the criticizing enjoy theirs. Just my opinion.

One hallmark of Kenny’s playing has been that aggressive, minor pentatonic sound, like Cold Shot on steroids. While he’s excellent at the ballad sounding stuff, a **lot **of his songs throughout the years have had that minor blues sound.  It’s tough, muscular, very, very hard to do well for an extended period of time.

What struck me last night, is that Kenny can play in that style for long periods of time, without losing the energy of the song. A classic example is the song Voodoo Chile’ (Slight Return).  I get so bored playing that song that I quickly run out of ideas. But I watched him play 4 or 5 songs, all with that same feel last night, without getting bored with any of it.

One last note about the show. When the opening bands were done, and their stuff was moved, I noticed that Kenny had 3, count them, 3 blackface Fender twins on stage. I was happy for my earplugs.

And a big surprise for me was to see none other than Chris Layton on drums. It’s the first time I’ve seen him play live and it made what was an excellent show even more special for this SRV fan. I know Kenny has been playing with Double Trouble for years now, so I’m sure it’s no longer intimidating.