A Week In Austin

Mar 25th, 2012
This post was originally written on the StevieSnacks.com blog.

Earlier in March, I made the trip to Austin, TX, partly to experience SXSW, but also because....well, it's Austin, and that requires no explanation when you're a Stevie Ray Vaughan nerd.

I was welcomed to Austin by a cab driver from Austin Cab Company who was very friendly as he ripped me off, taking me the long route to my rental car location. Don't trust a cab driver, do your homework.

Fortunately the day ended on a good note, with a delicious vegetarian meal from Bouldin Creek Cafe. I'm not a vegetarian, not by a long shot, and didn't realize they were a 100% vegetarian restaurant until it was time to order. No worries though, the food was excellent, and the service was very friendly.

First some pictures, then the rest of the story in words. 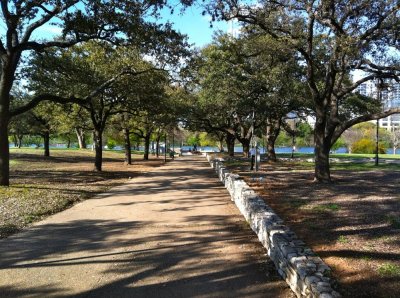 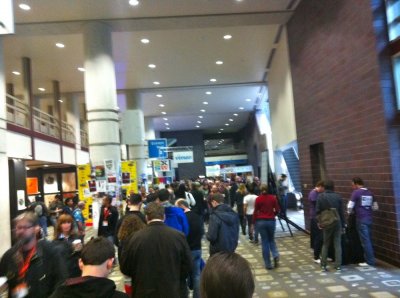 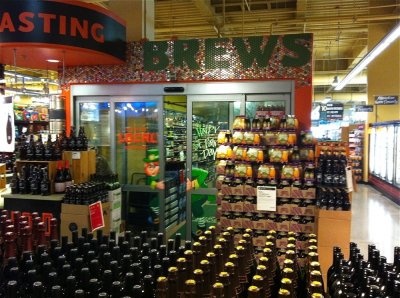 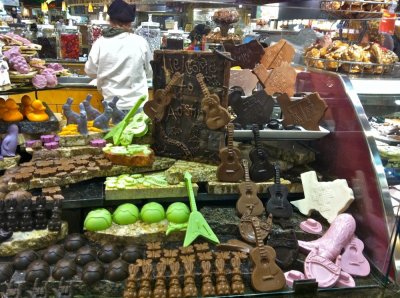 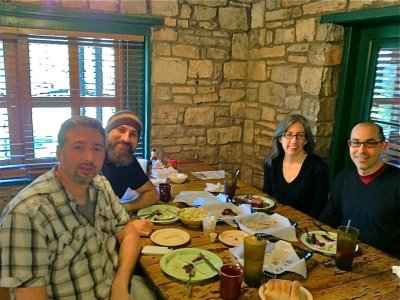 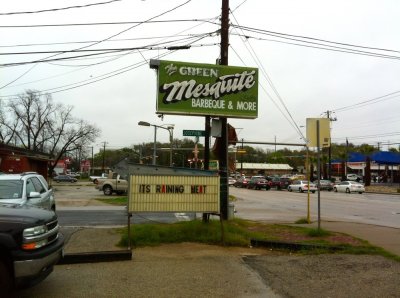 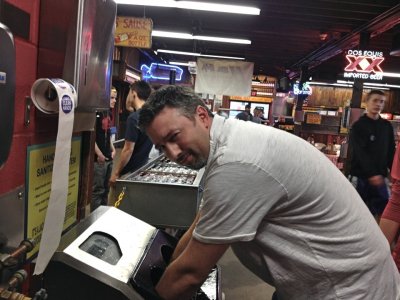 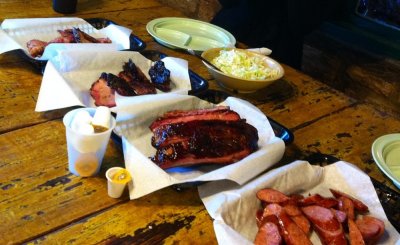 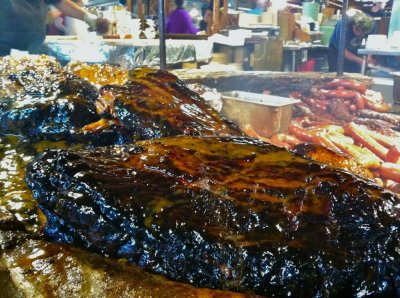 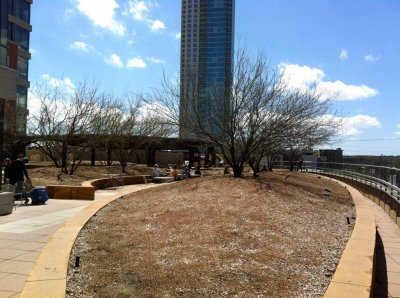 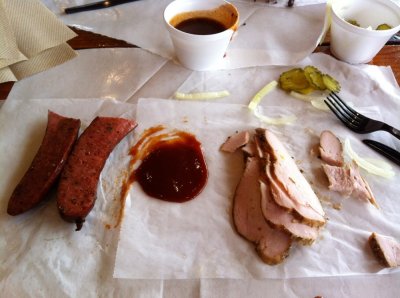 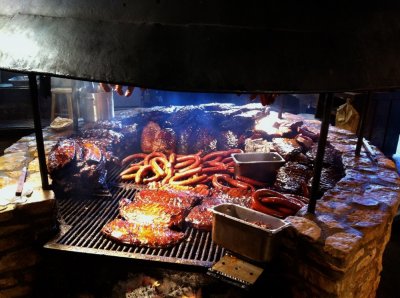 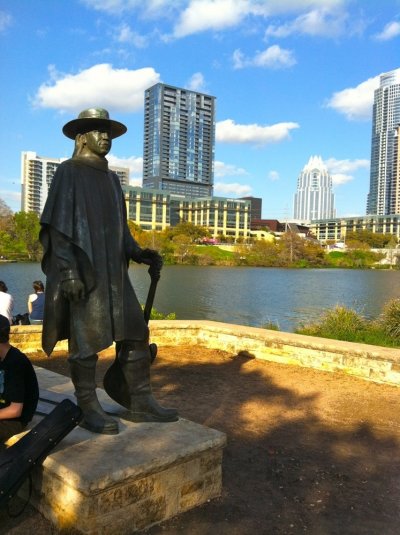 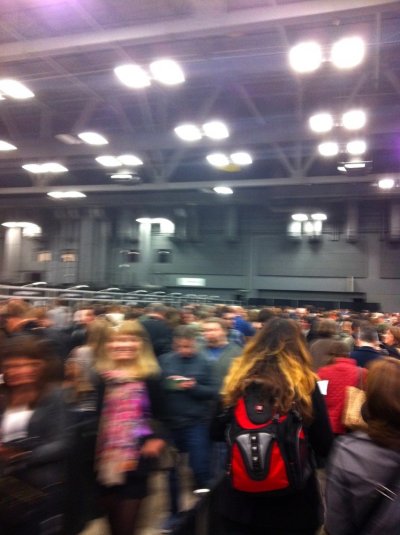 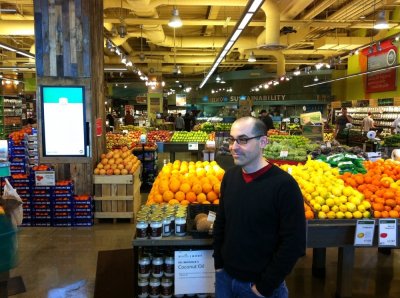 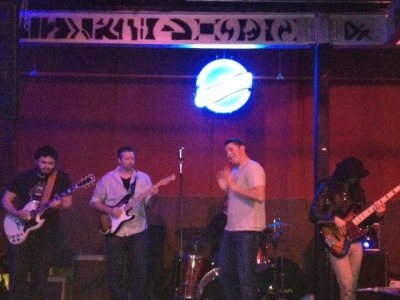 All I'll say about SXSW is that it's a good thing my pass was free. I hate waiting in line, wading through crowds, paying for overpriced food, and most of all, late night parties paid for by marketing companies. My level of interest in the topics being presented was only surface deep, so any time downtown was mostly spent trying to locate a good WiFi signal in order to write funny #sxswhaiku poems on Twitter.

Fortunately, there was a lot more about Austin I had come to see, so casually attending SXSW didn't give me any heartburn.

In need of a guitar to use at the upcoming blues jam, I arranged to borrow one from Marko Garafulic, a StevieSnacks customer who lives in Austin. We met at a place called SoundCheck, where he had rented a rehearsal room.

He let me use his Eric Johnson strat, and to my delight, he had set it up perfectly ahead of time. It played extremely well. We jammed for about 90 minutes, then he introduced me to someone who worked for SoundCheck.

One of my dreams is to do guitar clinics in places like Austin, but I have never gotten past the problem of where to hold such a clinic. SoundCheck turned out to be a very good connection. They've got huge rehearsal spaces, and plenty of equipment to rent, all in the same place. It would be a perfect place to hold a guitar clinic in the future.

On Sunday, my internet pal, Dan Benjamin took me, and 3 other people for a long drive into the East Texas wilderness, eventually arriving at a meat-eater's paradise, The Salt Lick BBQ.

No written words could communicate the experience better than the pictures. Delicious.

After that meal, I got the Dan Benjamin Whole Foods Store Tour TM. Imagine an entire floor of an office building turned into a grocery store, with its own parking garage below, a playground above, and no less than 6 different restaurants inside. Also, a beer cave.

We spent the rest of the afternoon hanging out at Austin Java (Barton Springs), drinking great coffee, and talking. It was a great day, with very interesting people, and one of the highlights of my trip.

On Sunday night, I trekked down to Friend's Bar on 6th St. to hear the Stevie Norman Band, not really knowing what to expect. Walking in to the bar, the sounds coming off the stage made me smile. The band was really tight, Stevie's guitar work was amazing, and the crowd was digging it. That was a great way to end a day.

The Guitar That Almost Came Home

Over the first few days of my trip, I had visited nearly every guitar store in Austin. One of my favorites was South Austin Guitars where I discovered a custom built Strat, handmade neck, with super lightweight body. After playing it for about 30 minutes on Monday, through several different amps. I almost bought it but decided against it.

The bridge was not a standard Fender bridge, and I was unsure if I could even get GraphTech saddles for it (a necessity on any guitar I own). Also, it would have needed a fret job within 18 months, so with those things in mind, I decided to leave it in the store for another buyer.

On Monday morning, I walked through the sea of vendor booths in the SXSW Expo. One booth that caught my eye was that of Mashroom.fm, a site that allows you to mix and match portions of YouTube videos together. I immediately had some ideas for how it could be used by the StevieSnacks Community, so I stopped to ask some questions.

It turns out, Motoi Konno, from Mashroom (in Japan), is a guitar player and recognized me from YouTube. Talk about a surprise! That was the last place I expected to see anyone who knew about StevieSnacks :-)

Mashroom seems like a really cool utility and I'm hoping to find some time to experiment with it in the future.

Later in the day, I headed down to the SRV statue where I met Jake Montgomery. He's a college student who was visiting Austin during Spring Break. A bit later, a young man walked up and asked if I was the guy from YouTube. Dylan Bishop is only 13, and his family was visiting Austin, and they just happened to be visiting the statue at the exact same time I was.

We talked for a bit, and his dad proudly showed me some clips of Dylan playing guitar at a talent show. It's no wonder he's proud, Dylan is quickly becoming a great player.

On Monday night it was time to jam. The Blue Moon Rock N Blues Bar was packed with people from SXSW, and some locals too. The JT Coldfire band rocked the house for about 40 minutes before the jam started.

I'll take a minute here to point out a few things about JT Coldfire. First of all, he's a fantastic guitar player, plenty of power, speed, and flash. But the funny thing is, you don't think about that so much when he's performing. Because he's a great performer too. He's not just about the guitar. He doesn't play like he's trying to blow the roof off the joint. He paces himself, plays to the crowd, and most of all, makes great music that's enjoyable to listen to.

Once the jam started, JT called a few musicians to the stage at a time. After a few songs, he motioned for me, two other guitarists, and a new singer to come up. I didn't know anyone else on stage, but when you're playing with great musicians, it almost doesn't matter.

We played about 5 songs, including (by my request) Texas Flood. It's hard to judge the tightness of a performance while you're on stage, but I'm not exaggerating when I that this was quite possibly the best group of musicians I've ever played with, and to them, it was just Monday night :-)

It may have been cliche' to request Texas Flood, there is probably no shortage of people who butcher that song, especially in Austin, but here's the way I see it. Fifteen thousand people visit StevieSnacks every month, and thousands more watch my lessons on YouTube every day. The vast majority of those people will never, in their lives, have a chance to visit Austin, TX, and even fewer will have a chance to play on stage there.

For those people, I decided it was worth the risk of being cliche'. Maybe SRV songs are overdone, maybe people in Austin are tired of hearing it, but for those of you who would give anything for the chance to do it, I asked anyway. And we played it. And it sounded awesome.

The experience of playing the blues with a great band, on 6th street in Austin, TX, in front of an appreciative crowd..........that experience is every bit as good as you can imagine.

The rest of my trip was spent exploring Austin and hanging out at the Convention Center. I ate breakfast at Austin Java several times (breakfast tacos of course), BBQ at Rudy's, and ice cream at Amy's. It was a very fun trip, but by the time it was over, I was more than ready to come back to State College to my family. It turns out that I'd be a terrible touring musician, because going that long without seeing my family was almost unbearable.

Thanks to everyone who helped make this a great trip, I look forward to seeing some of you again in May :-)