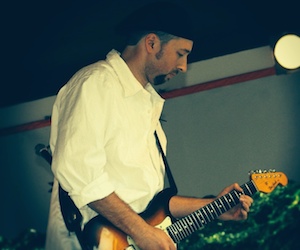 Blues music was not a part of my childhood, I grew up a liberal Mennonite in Lancaster County PA. I worked on a pig farm when I was 12, listened to techno music in junior high, and learned to dunk like Michael Jordan in high school.

That should tell you everything you need to know about how qualified I was to start playing blues guitar.

My first guitar was a G.W. Lyons that my parents bought as a high school graduation gift. At first I studied Led Zeppelin, G&R, but didn’t make much progress. In the fall of 1995 I started as a freshman at Penn State University where my roommate introduced me to blues guitar.

The album that got me hooked was **From The Cradle** by Eric Clapton. After I heard that album my fingers would not stop moving for several days. It felt as if I had been infected by an organism that was taking over my body. I walked around the Penn State campus with blues guitar solos echoing in my head before I could play a single note of blues guitar.

Later that semester my roommate persuaded me to check out Stevie Ray Vaughan. I was not immediately taken by his playing. That all changed when I saw Stevie playing on a rerun of Saturday Night Live. The song was “say what”.

I sat on my dorm room floor transfixed. Speechless. I couldn’t even move. I had never heard a sound like that and I knew from that point forward that I would do everything within my power to learn how to make that sound come from my fingers.

Over the next four years I studied Stevie Ray Vaughan’s playing closely with only a CD player and a VCR. I started my first band as a sophomore not knowing that I was the worst musician in the band. During my senior year I started another band, I had made remarkable improvement as a guitar player but was still a terrible singer.

I got a job for a software company in State College upon graduation. This job funded my delusions of grandeur as a musician. I even recorded two CDs of original music, playing all of the instruments myself. Guitars aside, the rest of the music and singing was about as good as you might expect.

I met my wife Lori in 2002 and we were married in 2003. She supported my musical endeavors - even allowing me to convert a basement room of our new house into a modest recording studio. I started another band in 2006, again with limited success. As time rolled on I began to realize that life as a successful computer programmer and designer was actually much better than the life that I would have found on the road as a working musician.

I don’t care much for traveling, I dislike most of the work involved with playing a gig except for the performing, and I like a nice predictable daily routine. Not exactly touring material. Once I figured that out life became a lot more enjoyable.

With my newfound sense of inner peace I was free to explore new ideas — ideas I would have previously dismissed because they did not contribute to my misguided goal of being a rock star.

One such idea was to post short guitar lessons on YouTube. Years earlier as I studied the playing of Stevie Ray Vaughan I often thought how cool it would be to break down what I was learning with an engineering approach. The idea always seems to far out of reach, and much less glamorous than being a rock star so I never did anything about it.

I uploaded my first video on October 21, 2007. The feedback was instantaneous and overwhelmingly positive. I quickly shot several more videos over the next week. At some point I decided I should probably come up with a name for this “new thing” I was doing.

For whatever reason I came up with the name StevieSnacks. Short, snack sized lessons in the style of Stevie Ray Vaughan. That’s about as much thought as I put into choosing what to wear each day. Little did I know how significant that name would become.

The lessons accelerated in popularity very quickly. Within one year I had begun selling enough premium courses to consider leaving my job. However we were expecting our first child in a few months, so I kept the golden handcuffs on for a bit longer.

By summer of 2009 it was very clear that with a new baby at home I could no longer be a good employee and keep up with my hobby turned business. I left my job in August 2009 To run StevieSnacks full time.

In 2013 I started envisioning the future of StevieSnacks. There were several things that I was sure I wanted to do. But I knew that I did not want to do them under the name StevieSnacks. So I began a long thoughtful process of choosing a new name. Several months later I landed on the name Texas Blues Alley.

The end of 2013 was a blur, I produced an insane number of lessons and a short amount of time and when the dust cleared in January 2014 I stepped away from the microphone for almost 5 months.

I began to build the vision that was in my head. It was one of the most rewarding creative processes I’ve ever been through. StevieSnacks – as a business — was not designed. It grew big before I had a chance to really think about what it is I wanted to do. I was not unhappy with anything that I produced under the name StevieSnacks. But there was a part of me that felt unfulfilled knowing that the business that became my career was created without any creativity.

Texas Blues Alley exists on purpose. It was created for a reason. It started as a vision that was refined over time, and I had the pleasure of turning that vision into something real. The day that I announced it was one of the happiest days of my self-employed life.

I currently live in State College PA with my wife Lori and my son Austin. Texas Blues Alley is my full-time job.